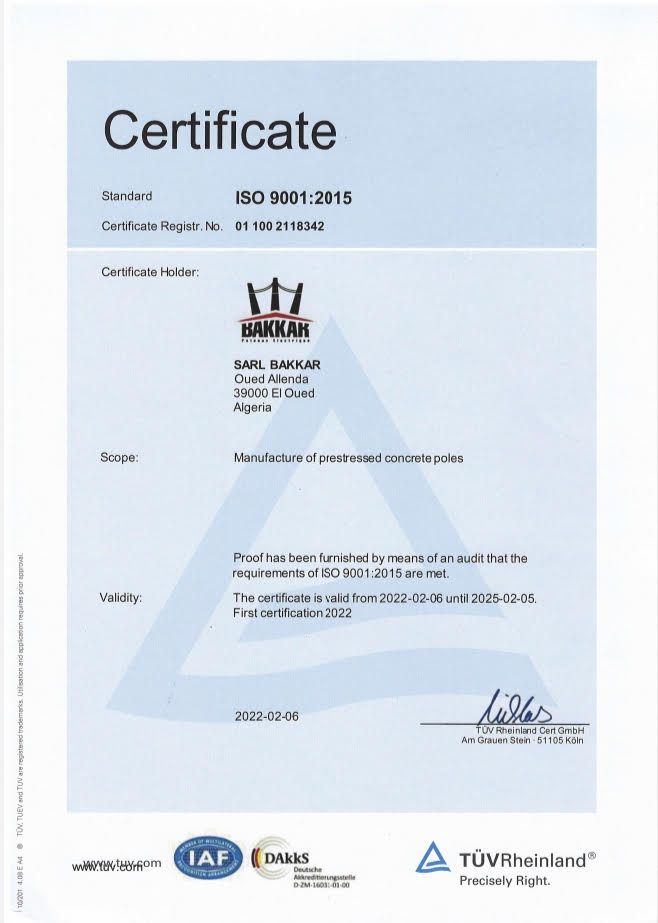 Bakkar Electric columns company, is a limited liability company, its social headquarters in the Wilaya of ElOued. and has been operating all over the country for a decade and covers mainly the south and east of the country.
The Electric Poles Production Unit was established as a branch of Bakkar companies. It was built in 2016 and was officially opened by the Minister of Interior and Local Communities, on an official visit to the Wilaya of ElOued during the month of January 2017.
Bakkar Electric columns company was awarded the ISO certification ISO 9001:2015 for quality management, Obtaining this certification is part of the agency's plan to develop its services and to monitor quality standards in its activities.
As part of the expansion of the company's activity, several projects are under construction and study in several stages in the coming years, including:
- Electrical precast concrete chamber.
- Precast concrete electrical substation.
- Precast communications buildings.
- Precast communications poles.
- Concrete ground communication rooms.
- precast utility sub-stations.
- precast communications buildings.
- Terrestrial communications building.

The enterprise strives to meet the needs of the market, at the local and even more comprehensive level, to the entire national country, with competitive production capacity and guaranteed quality.
The company's commitment has an impact on the product and technical characteristics, in terms of quality, hardness, resistance and results obtained in all the experiments applied to it periodically, through the company's allocation of a fully equipped laboratory with professional expertise capable of following up the stages of production and the implementation of various tests In all stages of production, and even on the final product, by careful inspection of the stability of quality, and excellence in the product.